Today we’re discussing increasing sales performance and business development in ways that most of us have never been taught. This is the #1 thing sales professionals must do to significantly increase their bottom line.

You can listen to the full podcast episode here, or continue reading below.

I was recently talking to a gentleman, Matt, who explained he was behind on his annual sales goal. He was frustrated and disappointed and desperately trying to figure out what to do next. As we talked, he told me he did not have enough time to do the preparation for prospecting or networking meetings and that it was getting increasingly harder for him to get in front of his prospects for industry specific reasons.

This scenario is not unique to him.  He — like many sales professionals I see – operate from a place that has many of them capped from peak performance AND confused about how to reach the next level without putting in additional hours of grit and grind.

In short, they have a story that runs in opposition to their goal.  “Sales are hard.” “I don’t have the time.” “The industry is disrupted.” “The economy is not in our favor.”  What they don’t realize is that their power house (their subconscious mind) is unwittingly seeking to affirm the story they are telling.

Their subconscious mind doesn’t talk them out of their order.  It says, “yes, yes, yes” and tries to fill the order.  And because our will power is not as strong as our subconscious mind, no amount of hustle (or next new strategy, waking up earlier, time management class) can out-perform these sales stories.

To explain this more, Matt’s story was operating from a limited paradigm commonly known as HAVE – DO –BE.  That is, when I have more, (fill in the blank:  time, money, energy or support), then I will be able to DO X for my business so that I can BE more successful or happy.

If you try to create from your old stories, you can only make choices based on the old stories’ limitations.

Einstein said you can’t solve a problem from the same level it was created.  In order to significantly change or improve your current circumstances, you must raise your level of thought.  You do this by approaching your problem from a higher perspective.

Cue Entrance:  The paradigm from which top performing sales professionals operate is… BE –DO—HAVE.  That is, when you BE in ways congruent with your outcome, then you will DO the behaviors to HAVE the level of success or achievement you want.

What this means is we must operate from the identity of the person who has already achieved the outcome we desire.  Operate from your vision.  In other words be vision-driven. Not circumstance-driven.

When I asked Matt how he thought a $1,000,000 generating sales performer would be, what he would do, and how we would feel, he said, “That’s easy.  I see him. He’s confident.  Stands tall.  Eager to jump in. He asks for what he wants. He delegates. Communicates to his team.  Has little to no self-doubt.  He takes risks and doesn’t let much bother him.”

Then I asked, “Is that how you operate?”  His defeated, “Huh, not at all,” identified his real obstacle to higher performance.

While he said he wanted to be the next $1,000,000 generator, his ways of being, doing and feeling were not congruent with that.  Instead, he said he was stalling on decisions, constantly worried about his financial picture and spent time wondering what might go wrong.  He realized most of his focus was on what he didn’t want to run into rather than what he wanted.  As a result, he said he was often in the weeds at work, navigating from his current ‘urgent’ circumstances.

Here’s an example to understand the BE-DO-HAVE concept further. Research has shown that 70% of lottery winners go broke two to three years after they win millions of dollars. Why? The reason is because they have not taken on the ways of being of a wealthy person. They are not operating from the identity of a wealthy person and, therefore, their behaviors run against being able to even maintain what has fallen in their lap.

It’s not a secret.  It’s physics.  It’s called the sympathetic response.  If you have two pianos in a room and you hit the key on one piano, that same key will vibrate on the other piano.  Why?  Because both pianos’ strings are vibrating with the same energy and frequency.

Everything is energy.  The piano and you are energy.  Make sure your frequency (a result of who you are being, doing and feeling) is in tune with your vision and what you want.  Raise your frequency to be there in advance of the achievement of your goal.

The key to achieving whatever sales number it is you desire (and this obviously goes way beyond achieving sales as you may see) is to operate as if your goal has already been achieved.  Be vision driven instead of circumstance driven.

Action Step:  Ask yourself this question and write down your answer…

“Who would I BE, what would I DO and
how would I FEEL if I already achieved X?”

Then move throughout your day from that frequency or identity.

If you are looking for a challenge, do something that reflects your success is inevitable.  A demonstration of sorts.  Hire an additional team member.  Pull the trigger on the car you’ve been wanting to buy.  Say ‘yes’ to attend an event or meeting you are not prepared for.  This sends a message to your subconscious mind that you’ve got this.  Brain science has shown your brain will seek and (this is key) create evidence to confirm you are right.  Your results will follow.

What’s my story costing me?

I recently did the math with a man who was making $200,000 a year and couldn’t break through this number despite the new strategies and trainings he seemed to employ for the last three years.

We looked at his story.  He said, “Sales are so hard.”  Ultimately, his story was that the only way to sell more was to work more hours.  He knew he wasn’t willing to do that due to his young family.

Reaching for the stars in your sales world is not about ego.  It’s about service.  You have the answer to somebody’s deepest needs and desires.  You playing from a half version of you doesn’t serve the world. You are ready to create ripples. Identify your sales story.  Rewrite it to benefit you.  Then operate your BEing as though your success has already been achieved.

As for a new sales story how about, “It is my responsibility to sell what I have to offer.”  Now that’s a good story!

Subscribe on iTunes for more tips, tools and inspiration to leading the optimal vision of your life, love and leadership. Remember, a half version of you is not enough. The world needs the fullest version of you at play.

With over 20 years of experience as an executive and leadership coach, Rita helps leaders — emerging and established — excel in corporate and entrepreneurial environments.

Through her coaching programs, private coaching and masterminds, Rita shows leaders how to win consistently and create the impact and legacy they desire.

Central to Rita’s work is the understanding that you will never outperform your current programming, no matter how strong your willpower.

When you learn to use Rita’s proprietary Neuroleadership Growth Code, a technology which uses the best of neuroscience and transformational psychology to hit the brain’s buttons for change, YOU become both the solution and the strategy.

Rita believes if leaders were more clear about how transformation really works and more intentional about creating what they want, their impact, success and influence in the world would be unstoppable.

Her mission is to end talented, hard-working and self-aware leaders spending another day stuck in self-doubt or confusion and not contributing their brilliant work and talent the world so desperately needs. 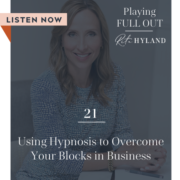 Using Hypnosis to Overcome Your Blocks in Business 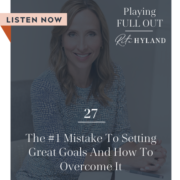 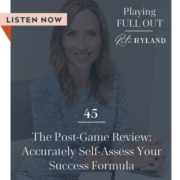 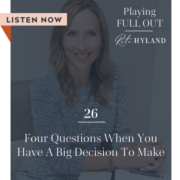 Four Questions When You Have A Big Decision To Make 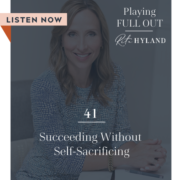 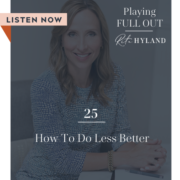 What To Do When Bad Things Happen

Identifying and Holding Your Boundaries With Less Struggle
Scroll to top