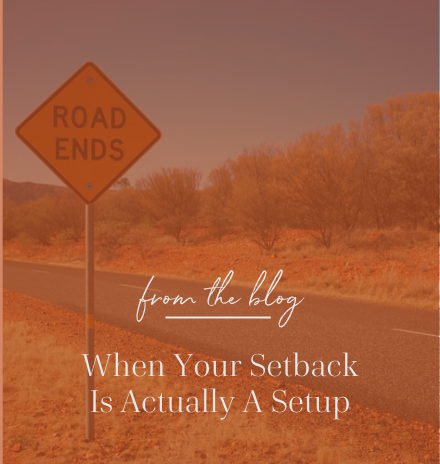 Lately, I’ve been thinking a lot about how many of our setbacks are ACTUALLY setups for something better.

My best friend from childhood lost her father last week. I’ve known my friend since we were eight.

I don’t say it lightly when I say her father was an amazing man. For the last 25 years, he raised six children alone after his wife passed away due to breast cancer at age 49. Today, the family with grandchildren comes in at a whopping 26, with one more to be added soon.

As I looked at them, I thought what a legacy he has.

My friend and her father have lived in different states for the last 20 plus years, but she spoke to him every day. As a teacher, she and her family were able to live with him each summer. His family truly was his pride and joy.

Like many, Covid presented some challenges as his health continued to decline.

A week or two before he was to get the vaccine, my friend was hesitant to see him until after he had received it. Despite both of them wanting her to visit, she decided to wait.

As she planned for her next visit after he received the vaccine, she decided to do something different. She would rent a home by a beautiful lake and invite her five siblings and their families to join.

Everyone made it there. It was spectacular; the weather, the house, the conversations with their father late into the evening at the dinner table — simply unforgettable.

Only a few days after their return, her father’s health rapidly deteriorated. It was then that he died with all of the family around him at their childhood home.

After the funeral, my friend and I took a walk. She expressed how deeply pained she was that she had not visited him during the week before he got his vaccine.

She could not stop thinking about it, and I could see how sad it made her.

I suggested to her that without the setback of not seeing him for that one week, she likely would not have planned nor experienced that next AMAZING week with the entire family right before he passed.

That setback caused her to expand her thinking and paved the way for something even better.

Said differently, the setback provided the setup. (I believe it was Joel Osteen who first said this.)

I wasn’t trying to minimize my friend’s pain or plaster a happy face over her sorrow. I only wanted her to see that what she considered awful may have been necessary and a good thing after all.

Sometimes what appears to be a setback is actually a setup for something better, but we get too stuck on the setback that we don’t notice or see why it had to happen that way.

In my experience, what happens to us happens for us. Again, that doesn’t mean to dismiss our grief. But sometimes, what we see as a ‘mistake’ or ‘disappointment’ upon closer inspection wasn’t a mistake at all. Instead, it was part of a well-laid plan.

What is your most recent setback? Maybe you’re going through a setback now?

If there is an area of your life where you are struggling, one of the surest ways to bring healing or peace is to reframe why that needed to happen in order to bring about something else.

What positive thing would not have happened if the setback had not happened?

And if you can’t see it yet, remain curious.

Finish the statement, “I wonder if that happened so that…”

Then listen. Write your thoughts down. You may be surprised that what previously pained you now fills you with gratitude.

I believe we are supported at all times by something larger than ourselves. This provides me peace. When I am at peace, I make better decisions in my relationships and life in general. In turn, my most fulfilling and happy life unfolds.

I believe this is true for all of us.

Remember, the universe has your back. We don’t always get option A but sometimes what we previously identified as option B…it’s even better.

Look closely, and you’ll see it too!

With great admiration and gratitude,

How To Think About Building Your Legacy